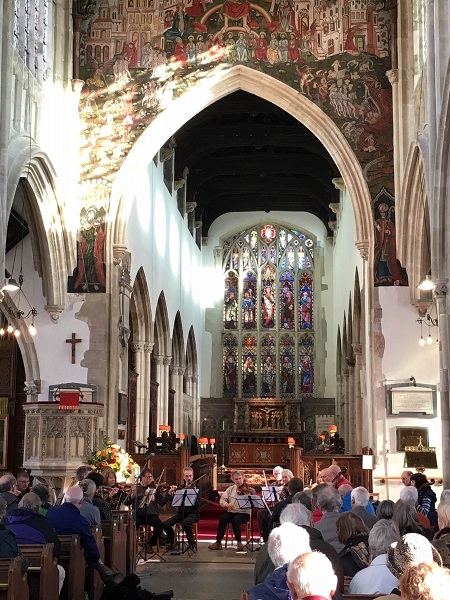 They were there by invitation of fellow musician Julie Mettyear because they all play instruments made by Benjamin Banks (1727-1795). Banks’s workshop was in Catherine Street in the city centre and he built up a national reputation for the quality of his instruments.

He also used to be a church warden at St Thomas’s, and he and his wife, Ann, are buried in the little south graveyard there. Their nine children were baptised in the church

The event was flagged as A Celebration of Salisbury’s Violin Maker, ‘The English Amati’ and it happened to be one of the first entertainments held in the church following the restoration of the famous Doom Painting which visitors flock from far and wide to see. Scaffolding to enable the painstaking work to be undertaken was only removed four days earlier.

The ensemble, who played violins, violas and cellos by Banks, chose to play music that had been listed in his advertisements of the time. An appreciative audience gave donations as they left for the church’s ongoing Quest 2020 repair and restoration appeal. 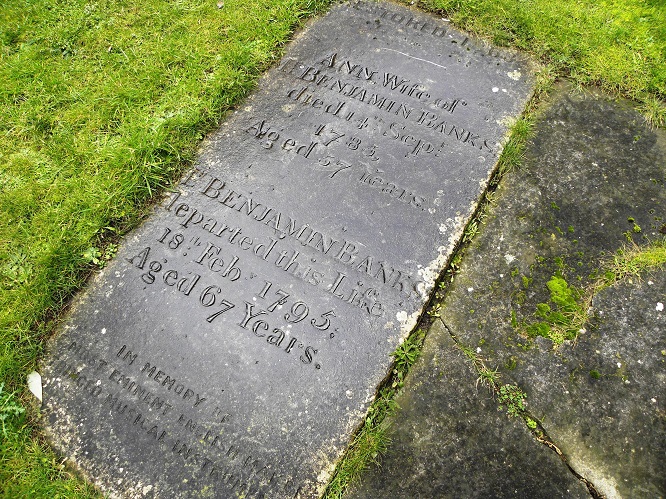 Benjamin Banks, famed stringed-instrument maker, and Ann, his wife, are buried in the churchyard at St Thomas’s. 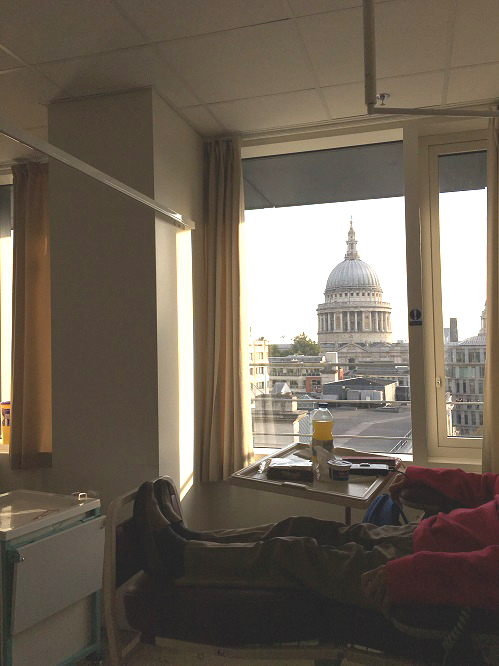 THE Happy Moonraker was visiting a friend who was an outpatient at St Bartholomew’s Hospital. I was speechless when I saw the view from her window. What would the average tourist pay for a view like that of St Paul’s Cathedral, I wondered. They probably wouldn’t want chemotherapy, though, like my friend.

We were on the seventh floor and were able to enjoy a bird’s eye view of one of the iconic sights of London.

The man in the neighbouring bed told us that he’d been there on one occasion when he was able to photograph that view with a stunning sunset behind it. It obviously wasn’t my turn for that one. 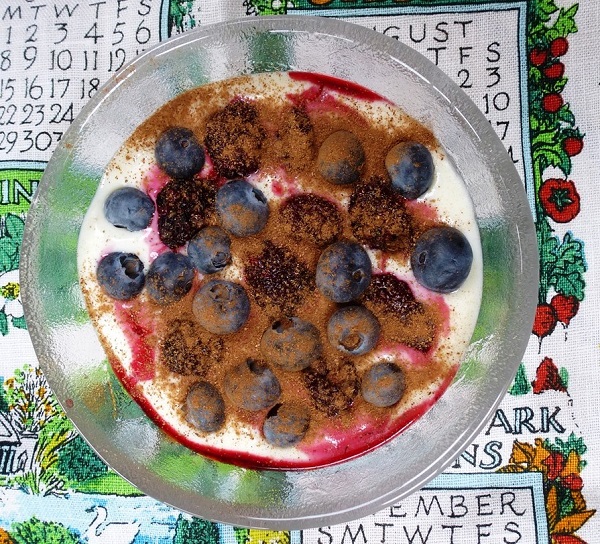 IF you believe the old wives’ tale, you should not pick blackberries after today. There has been an amazing crop this year and I have frozen plenty, but if you’ve time to pick some before the end of the day, you could serve them with blueberries, organic vanilla yogurt and a good dusting of cinnamon. You don’t need to add sugar because the yogurt is already sweetened. 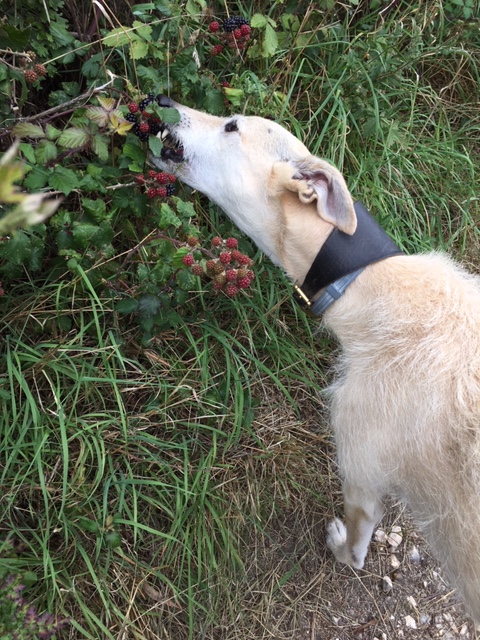 Rosie the lurcher picks her own blackberries.

One of Tilly the terrier’s frequent walking companions is a lurcher called Rosie. She is extremely fond of blackberries and picks and eats her own, carefully ensuring that she doesn’t get spiked by thorns at the same time. Rosie certainly isn’t bothered by any old wives’ tales. 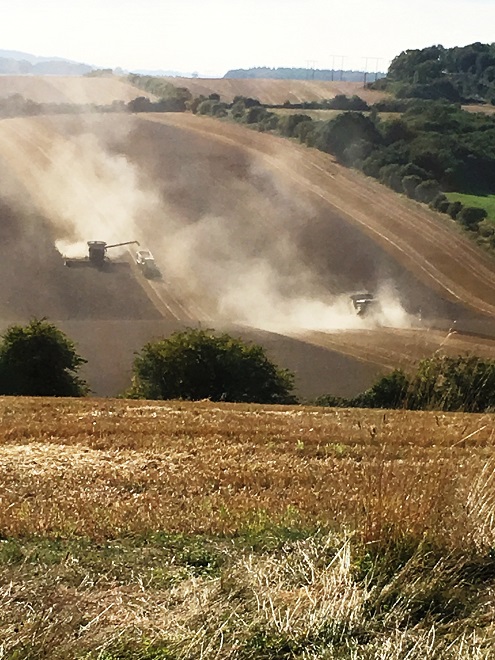 Acres of wheat being harvested west of Salisbury.

THE air has been full of harvest dust and the sounds of tractors and trailers roaring past to empty their loads of grain. Then they roar past again as they dash back to resume duty next to the combine harvester. With rain forecast, there is always pressure to work well into the night before the grain gets wet.

We enjoyed watching them all at work on the edge of our favourite stretch of woodland west of Salisbury. They were cutting wheat, and Tilly the terrier was not in the least interested. She found a chalk mound and climbed to the top just to show who was boss. 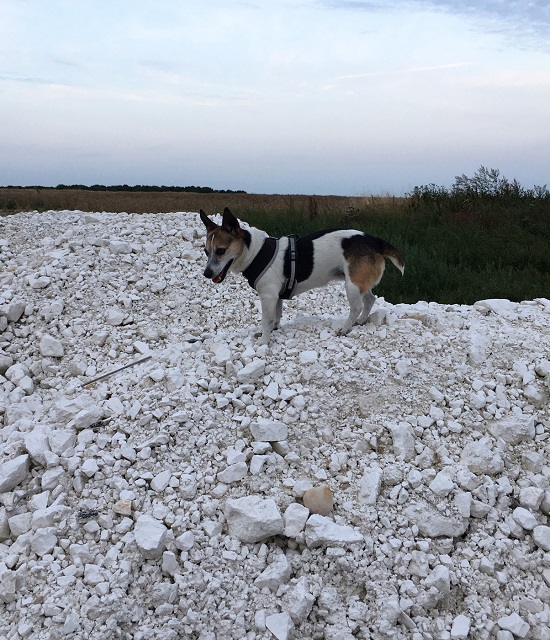 Tilly the terrier is more interested in climbing the chalk mound than watching combine harvesters at work.

The terrier in charge of the combine harvester below clearly has a different attitude and knows where his responsibilities lie. Yes, The Happy Moonraker took the photo through the car windscreen, but it didn’t come out too badly. 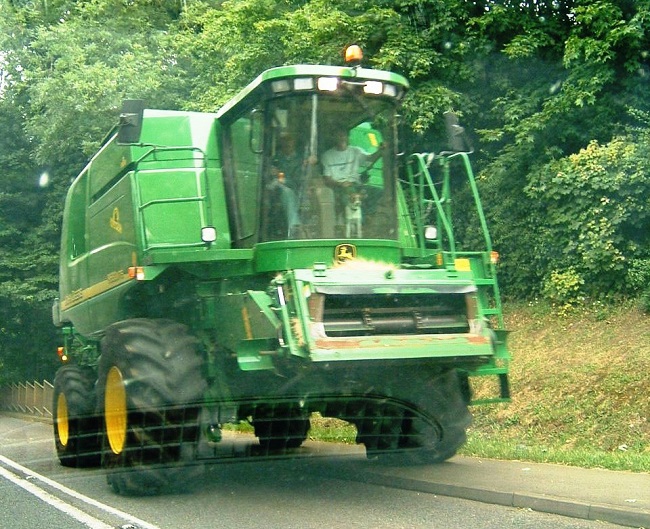 A Jack Russell terrier in charge of a combine as its driver heads from one field to another. 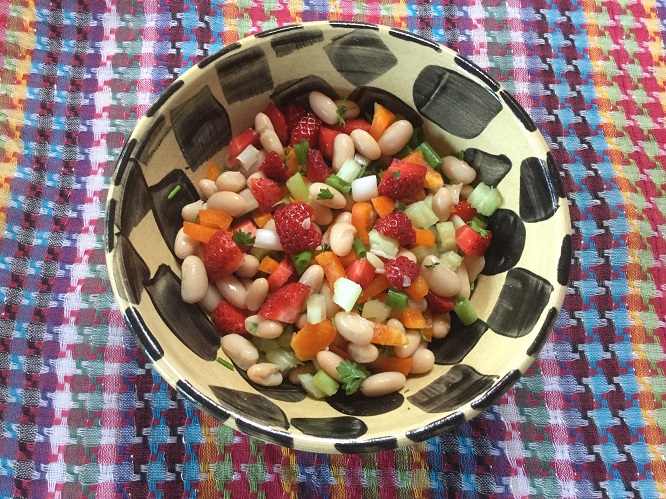 THE Happy Moonraker loves a good strawberry, especially if it is locally grown. However, there have been a few disappointments lately, with strawberries that look fantastic but that turn out to be lacking in that essential sweetness and possessed of a really hard core.

It was a few left-over disappointing strawberries that provided the inspiration for this salad. Apart from adding a juicy element to the salad, they also lend an attractive colour contrast and are quite a useful talking point if conversation is flagging.

400g can of cannellini beans, drained and rinsed

Half an orange (or red) pepper

Method: Mix all ingredients together and serve with your preferred dressing.

THE Happy Moonraker enjoys hot weather. Friends might complain about difficulty in sleeping, about lacking energy and how they long for lower temperatures so it must be miserable if you don’t enjoy blue skies and 30 degrees or more every day.

Salisbury’s parks have provided attractive oases for families. This time last year the Queen Elizabeth Gardens were cordoned off and closed to the public for months because of the Novichok poison that had been found there. It meant that children had no easy access to a water course during one of the hottest summers on record. This summer is different, however, and families have been able to enjoy playing, paddling and picnicking there.

Tilly the terrier seems to prefer cooler weather but a walk in the woods always suits her and she is expert at finding cool places at home. 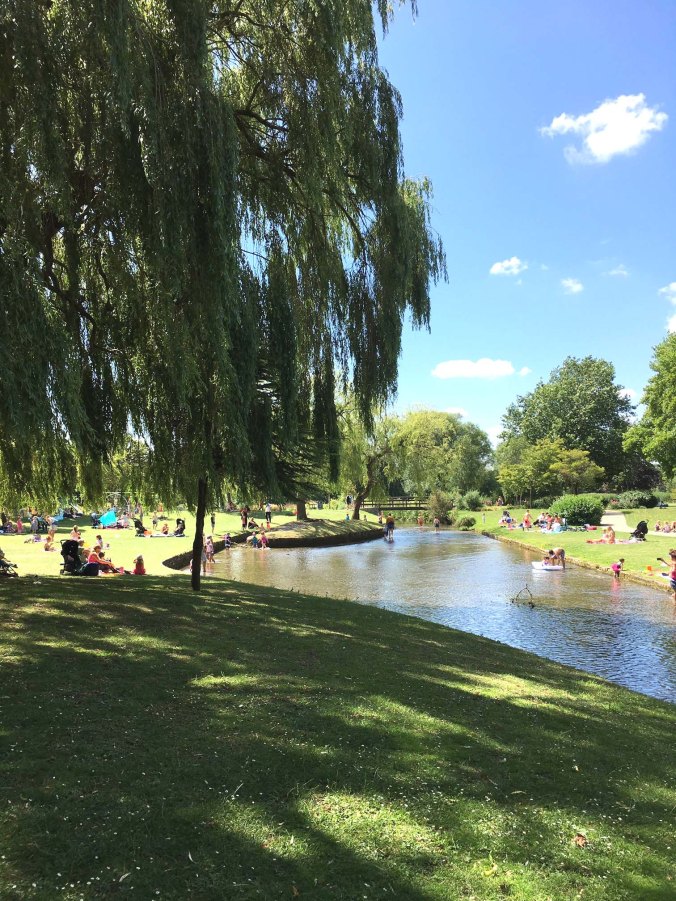 Families enjoying one of Salisbury’s prettiest public parks, the Queen Elizabeth Gardens, on a hot day. 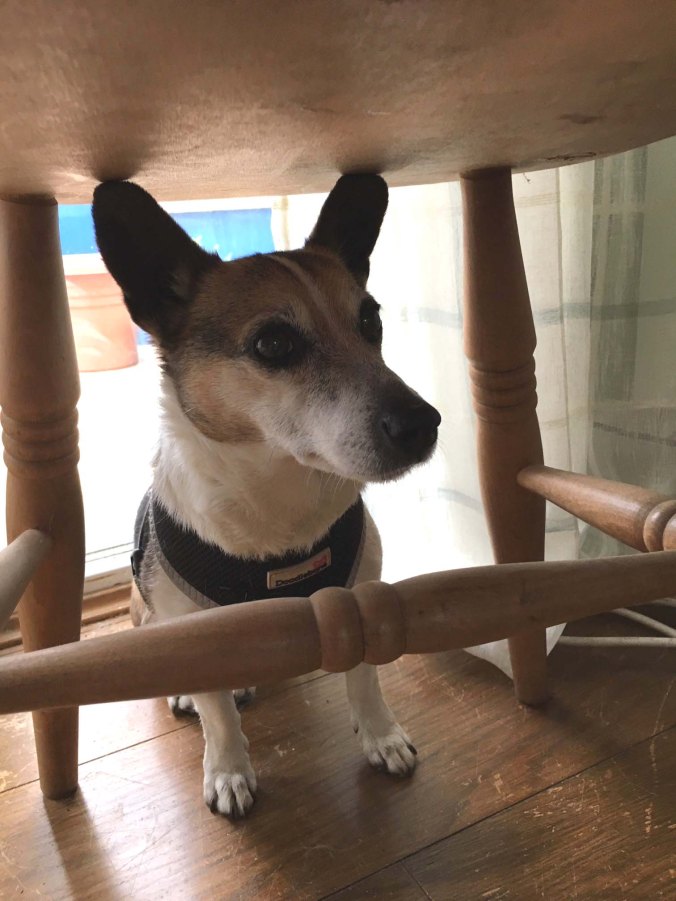 Tilly the terrier finds a cool spot under a chair on one of the hottest days. 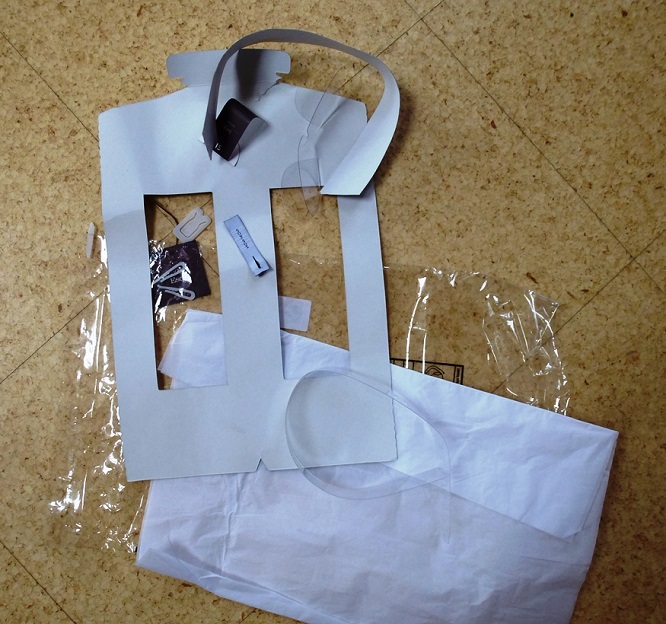 THEY call it eco-anxiety.

From that ghastly (but effective) polystyrene macaroni that is used to pack things, to over-packaged and impossible-to-open items that you buy in the hardware shop. From strawberries in their plastic punnets with that little piece of bubble wrap in the base and the thin plastic film cover, it is all destined to heighten the feeling of eco-anxiety.

When someone was saying how bad travel-sized plastic bottles are, that was the last straw. At least they’re not single-use, I whimpered.

And what about our avocado and banana habit? If you buy them packaged, hardly any of the wrapping is recyclable, and what about the air miles involved in bringing such exotic items here?

Perhaps the worst things of all are shirts: imported from China or elsewhere in south-east Asia and packaged in the most ridiculously complicated and wasteful fashion.

It seems crazy that something like a shirt has to be despatched from the factory using so many types of plastic, to say nothing of metal clips, cardboard and tissue paper. Surely it’s time someone invented a simpler, less wasteful method. 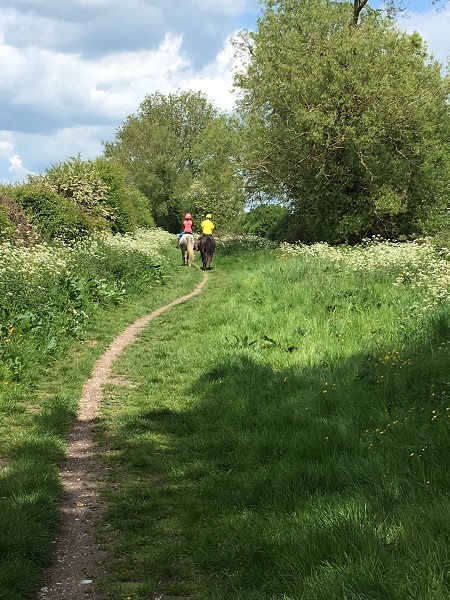 Two riders out for a gentle hack one sunny afternoon, on a buttercup- and cow parsley-lined country path near Salisbury.

THE Happy Moonraker’s riding days are over but it is always a delight to see horses and riders out and about.

Vehicle drivers are, for the most part, respectful and slow down until the horses reach the sanctuary of a rural path that can only be reached by walking 150 yards along a busy road.

To my great relief Tilly the terrier has never had a problem with horses, sheep or cattle. Squirrels and postmen are, of course, another story.

THE Happy Moonraker is more than happy to stay in the same small corner of the country surrounded by birdsong and spring flowers, but sometimes circumstances dictate a trip further afield.

I’ve just been to London. To say it was bustling would be an understatement. Interesting things spotted between a number of destinations included this delightful garden on the site of a bombed church. 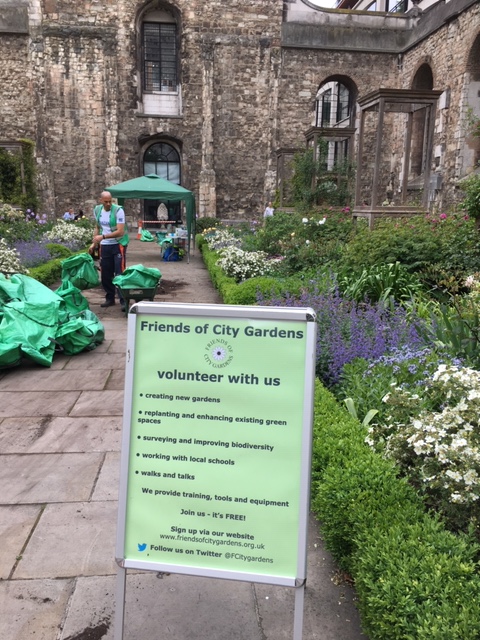 A volunteer-run garden on a bomb site in the City of London.

The information board in the photo states that it is run by volunteers, and they clearly do a wonderful job. As well as providing a peaceful and colourful little oasis for City workers to sit in, it supplies an unexpected area of biodiversity in what is otherwise a traffic-filled concrete jungle.

Also spotted was a blue plaque to the artist and First World War poet Isaac Rosenberg. This was on the wall of the Whitechapel Gallery, formerly the Whitechapel Library where he had studied.

Rosenberg, who was killed aged 27 on the Somme on 1st April 1918, had studied at the Slade School of Art with such great names as Paul Nash, Stanley Spencer and David Bomberg.

The bus jerked into life so I didn’t have time to take a photo of the plaque. 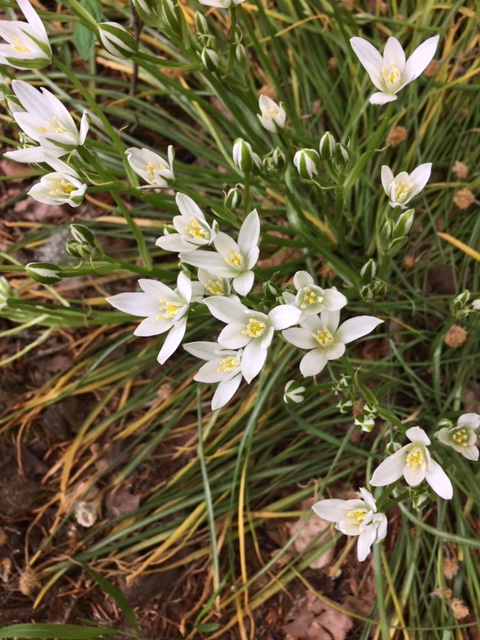 Star of Bethlehem found growing in a South Wiltshire wood.

Back in my comfort zone in the woods, it was a surprise to see these flowers which I have never seen before. I knew what they weren’t: they were not snowdrops, stitchwort, wild garlic, white bluebells, and so on, but what were they? It turned out they were Star of Bethlehem (scientific name: Ornithogalum). I’ll know next time.

Apparently Star of Bethlehem is native to the Mediterranean region so who knows what it is doing in a South Wiltshire wood. 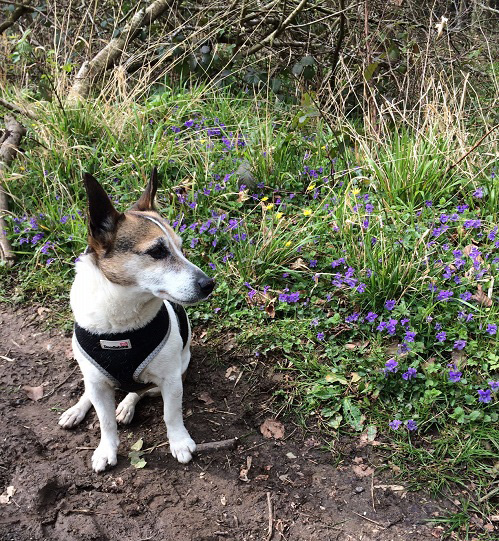 THE bluebells are not fully out quite yet, in spite of the wonderfully warm weather. Instead, though, the violets are out in force in the woods.

Tilly joins The Happy Moonraker in wishing everyone a happy Easter. She couldn’t hear any squirrels so was quite content to sit when asked while her photo was taken.